We study the optimal control of leukemic cell population presented in [2], namely the optimal use of a combination of cytostatic and cytotoxic drugs in order to reduce the total cancerous cells. The model from [1] and [3] considers two sub-populations of leukemic cells: the inactive resting cells, and the proliferating cells. Resting cells go into the proliferating phase at constant rate

. Proliferating cells either die by apoptosis with rate

or divide during mitosis into two daughter cells. Mitosis has a duration of

and the daughter cells start in the resting phase. We introduce the age variable a for the time spent in the proliferating phase, and note

the resting population and

the proliferating population. We consider two drugs: a cytotoxic that induces a death rate

in the second half of the proliferating phase, and a cytostatic

that results in a fraction

of inhibited resting cells that are blocked from entering the proliferating phase. This age-structured model is represented on following figure.

The system follows the dynamics:

In order to handle the transport equation for

, we note the total and second half proliferating populations

As detailed in [1] and [2], by the method of characteristics the dynamics can be rewritten as a system of delay differential equations corresponding to a controlled version of Mackey’s model [3].

We refer the reader to [2] for the formal analysis of this system, namely the existence of solutions and the introduction of age-weighted populations

to counteract the horizon effect that would cause to always stop all treatment at the end of the time interval. Taking into account constraints on the maximal cumulative dose of drugs, the resulting optimal control problem writes as

where \lambda is defined by the equation

with the border cases

From [2] we take the initial conditions

Numerical simulations are carried out for three cases: 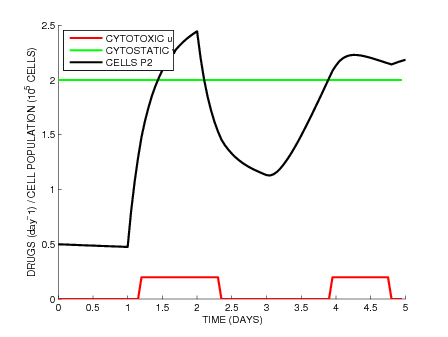 , with cumulative limit. Optimal solution is bang-bang with cytotoxic administered when sub-population 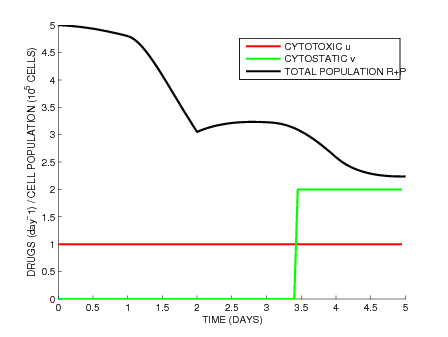 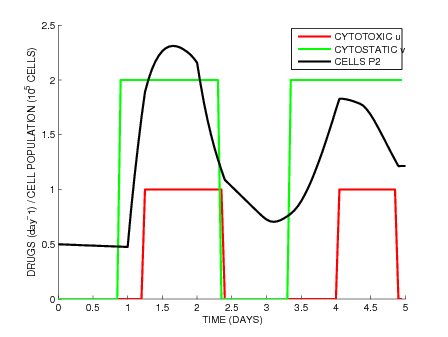 , with cumulative limit. Both optimal cytostatic and cytotoxic are bang-bang.