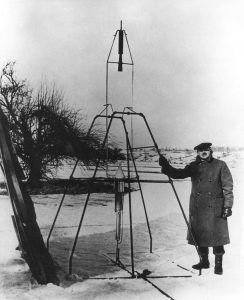 This well-known problem (see for instance [1],[2]) models the ascent of a rocket through the atmosphere, and we restrict here ourselves to  vertical (monodimensional) trajectories.
The state variables are the altitude, speed and mass of the rocket during the flight, for a total dimension of 3. The rocket is subject to gravity, thrust and drag forces. The final time is free, and the objective is to reach a certain altitude with a minimal fuel consumption, ie a maximal final mass. All units are renormalized. , with the volumic mass is

.
We use the parameters

The Hamiltonian is an affine function of the control, so singular arcs may occur. We consider here a path constraint limiting the value of the drag effect:

Numerical simulations:
Discretization: Gauss 4th order with 1000 steps.
Depending on the value of C, the optimal control structure changes from Bang-Singular-Bang to Bang-Constrained-Bang. 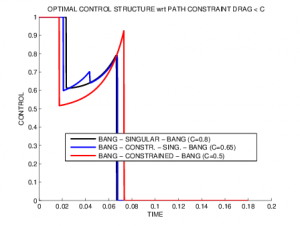 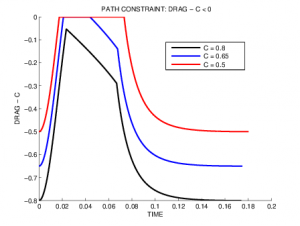