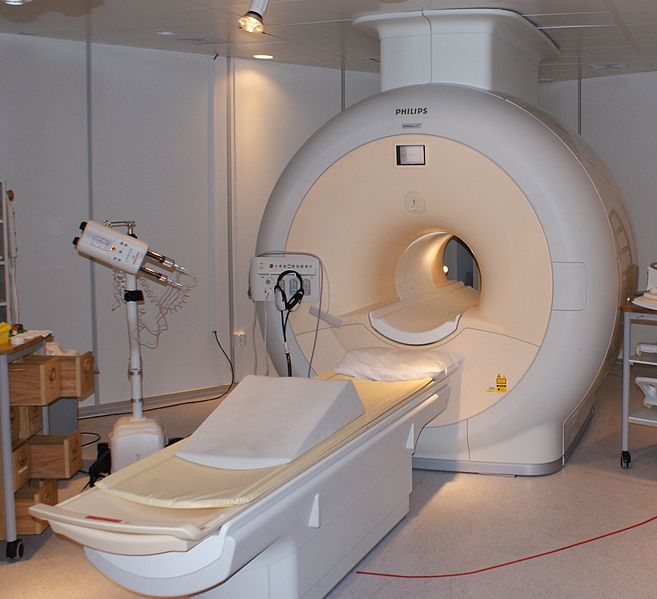 Magnetic Resonance Imaging (MRI) is a medical imagery technique that does not expose the body to ionizing radiation (such as X-ray). Instead, it relies on a strong magnetic field to excite atoms in the tissues, more  specifically hydrogen atoms present in water (water accounts for 70% of the human body mass). Measuring the rate at which the atoms go back to their equilibrium state allows to reconstruct the spatial distribution of water, and by extension to differentiate tissue types.Finding the magnetic field that maximizes the contrast between two types of tissue can be written as an optimal control problem, studied for instance in [1,2]. The magnetization vector

for each 1/2 spin particle follows the Bloch equation (here in the 3D, bi-input case)

with u the magnetic field (control) and

relaxation parameters depending on the tissue. In the simplified, 2D, mono-input case, we get

, the contrast is  linked to

at the end of the excitation phase. The classical “contrast by saturation” method consists in bringing one  spin to the origin (saturation) and the other as far as possible. Assuming both spins start from the equilibrium point at the north pole, the optimal control problem is

for the saturation of

. The Hamiltonian is linear in the control, and it can be shown that the optimal control is a sequence of Bang and Singular arcs, noted nBS (ie 2BS denotes a bang-singular-bang-singular structure).

We illustrate this problem on the (cerebro-spinal fluid,water) case, see below, with an example of a 2BS structure. 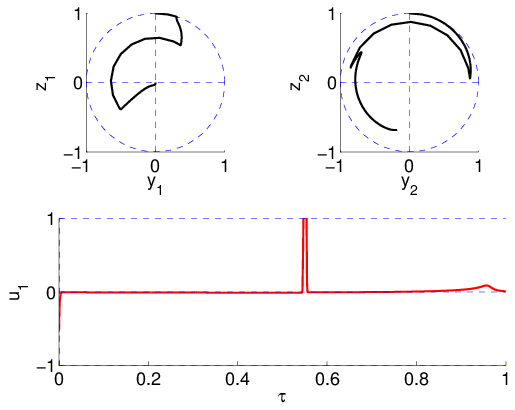 A comprehensive study using indirect shooting and differential continuation methods (HAMPATH,[3]) indicates the existence of numerous families of local solutions with  different structures, and shows that the optimal structure depends on the final time, as shown here. 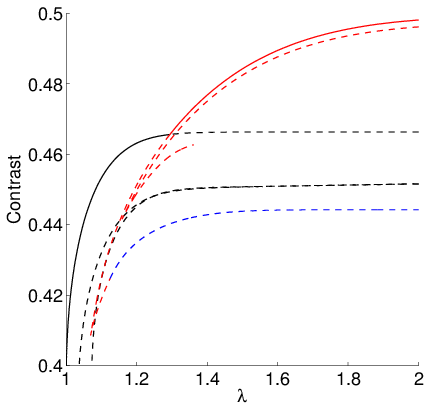 [1] B. Bonnard, M. Claeys, O. Cots and P. Martinon. Comparison of Numerical Methods in the Contrast Imaging Problem in NMR. In 52nd IEEE Conference on Decision and Control, Firenze, Italy, 2013.